Introduction of the Project

In February 2019, Evaluation actors in Kenya from the African Gender and Evaluation Network (AGDEN) and International Development Evaluation Association (IDEAS), won a competitive award for innovation challenge by The International Organization for Cooperation in Evaluation (IOCE) and EvalPartners to work in the area of localizing Democracy, Rights and Governance Evaluation Practices.  The project was titled ‘Expanding Democratic Spaces for more Inclusive and Equitable Governance: Integrating Gender-Responsiveness and Equity-Focus into Legislation through Evaluation’.
The project embarked on a one year implementation of the planned activities in collaboration with the Kenya’s Parliamentary Caucus on Evidence-Informed Oversight and Decision Making (PC-EIDM).
The first activity was the breakfast meeting with all key stakeholders, to have their buy in and plan together the course of action for a successful but sustainable results. The parliament took the opportunity to validate the five year Strategic plan for the Parliamentary Caucus on Evidence-Informed Oversight and Decision Making. The project team conducted a participatory training workshop for the parliamentarians on evidence use, gender and equity-focused monitoring and evaluation and the alignment of national strategies with the goals for the SDGs and Africa Agenda 2063.
For sustainability and Institutionalization the parliamentarians felt and expressed the need to have their staffs trained on evidence creation and packaging, evidence use and basically the M&E processes to strengthen the overall goal of evidence-informed decision-making with a gender-lens. The project team conducted the second training workshop for the parliament staffs and other key stakeholders. The participants were drawn from the following areas:

Kenya’s Parliamentary Caucus on Evidence-Informed Oversight and Decision Making and the project team launched a National Network of Kenya Monitoring and Evaluation Champions. The champions aim to strengthen Monitoring and Evaluation and Evidence use for Gender-Responsiveness and Equity-Focused legislation. This event was aired in the News by Kenya Television Network https://youtu.be/RhsS3moqCsQ  And published in the Daily Nation Newspaper.

Honorable Dr. Makali Mulu, Chairperson of the Parliamentary Caucus on Evidence-Informed Oversight and Decision Making, pointed out the need for a critical mass of M&E champions in the country. He defined the word champion as written in the dictionary: an advocate, defender, promoter, and supporter. He emphasized that a champion defends by word and deed. And the M&E champions should borrow from the human right champions to vigorously support and advocate and if the worst gets to the worst get confrontational for strong, full resourced M&E activities. He urged the need to think around the parliament’s strategic plan. Hon Makali, launched the M&E Champions and borrowing from the Bible, he stated “Champions, go out there and preach M&E in all parts and sectors of Kenya”.

Honorable Dr. Susan Musyoka, Founder of the Parliamentary Caucus on Evidence-Informed Decision-Making and former Member of Parliament reminded everyone that M&E championship should not be a one man’s show. Every champion has something to offer and should be embraced to play a role in strengthening the culture of evidence use for decisions and legislations. Dr. Susan led the team to select the stewards and the trustees of the champion’s network. And the team took time to democratically debate on the name of the champions’ network. At last, the team voted for the name Kenya Evidence Monitoring and Evaluation Champions Network (KEMEC). The champions agreed on the date to meet and have their plan of action for the year, and received an in-kind support of a venue from both the AFIDEP and the University of Nairobi. The network was likened to a volcano by Dr Etta. And walking in the steps of the giants, the Kenya Evidence Monitoring and Evaluation Champions Network will be ginormous. 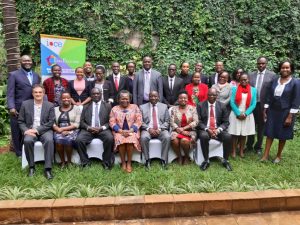 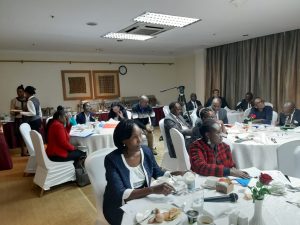 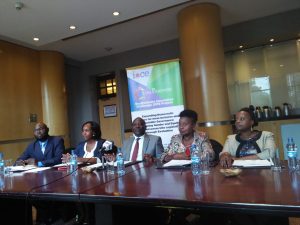 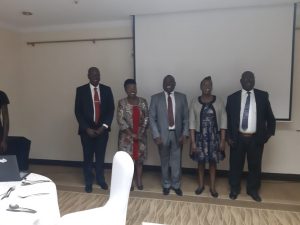 Disclaimer: The opinions expressed in this article are the author’s own and do not necessarily reflect those of the European Evaluation Society.