Time is up: Let’s increase efforts to mainstream gender in evaluations! 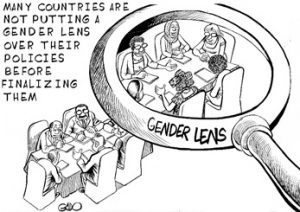 International Women’s Day is often a reminder and provides a good space for reflecting on where we stand with gender equality. With this blog, we want to mark the start of a quarterly series on gender and evaluation with the aim of setting a ‘quarterly reminder’ and advocating for a systematic approach for gender mainstreaming and gender-responsive evaluations.

To set the stage, let us start with the basic definition of what gender mainstreaming actual refers to. When speaking of gender mainstreaming, we talk about an approach that involves integrating gender perspectives into the design, implementation, monitoring and evaluation of policies and interventions with the objective of promoting equality and combating discrimination, ensuring that no one is left behind.

Sadly, despite these efforts over many years, the evidence from gender audits, meta-evaluations, evaluations, reviews, and quality assurance work suggests continuing gaps in the mainstreaming of gender in our policies, interventions, and evaluations.

This raises questions. What are we doing wrong or not enough of? How is it that despite our utmost honourable words, commitments, and efforts, we are still having difficulty turning gender mainstreaming promises into action? Why do we still not know much about how women’s and men’s lives have been affected by interventions? Why is it that, when we reach the point to evaluate our policies or programmes, gender mainstreaming appears as an “afterthought”, rather than a standard approach, visible in the designs, monitoring and evaluations of our policies and interventions?

We will start with our observations around five recommendations for further improvements, knowing that there are many others too.

The above represents just the “tip of the iceberg”, when it comes to recommendations and we see, that there is much more that needs to be done. However, we feel that we cannot wait any longer and must act now to avoid coming back on 8 March 2031 only to find the same issues all over again. For that reasons we believe we need to step up our joined efforts and commitments to walk the walk, not just talk the talk.

Thus, we would like to invite you to share your experiences with us, responding to our question: what did you do to strengthen gender mainstreaming in your evaluations?